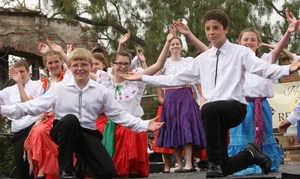 The Mission Basilica School will celebrate the annual St. Joseph Day celebrations on March 17 and March 19, 2017.


It will start with a mass at 8:30 am on March 17 where the 2017 royal court King and Queen will be crowned. The Royal Court consists of eighth-grade students who excel both academically and spiritually in school. This year, Patrick McClemmy will be crowned as King, and Sophia Lim will be crowned as Queen. They will be joined by their princesses Rachel Patin, Elizabeth Cota and Emelyn Conboy; and their princes: Erich Kisvarday, Nathan Aguilar, and Brian King. The Royal Court alumni are also invited to return and join in the celebration as honor guards.


The tradition of naming a St. Joseph’s Day Royal Court in the Orange County Catholic school began in 1953 to represent Spain’s King Carlos and Queen Isabella, who were the reigning monarchs in 1769 when the California mission system was founded.


The second-day celebration, March 19, 2017, will be marked with the dance performances of grades K-8 students on the Mission grounds at 10 am, in which parents and the students' families look forward to joining.


St. Joseph's day also celebrates the return of the famed cliff swallows to San Juan Capistrano from their winter home in Argentina. San Juan Capistrano is considered their spring and summer nesting grounds. Because of urbanization, these cliff birds are forced to find alternative nesting grounds so to attract them to nest at the Mission; a Swallows Vocalization Project started three years ago. It aims to bring back the swallows through recorded mating calls.


The festivities also include several performances from other local groups and schools plus local vendors which will serve meals, refreshments and treats all throughout the day.


St. Joseph is the husband of the Blessed Virgin Mary and the foster-father of Jesus Christ. March 19 was dedicated to him by the Western calendars since the 10th century and established as a custom in Rome since 1479.


Mission Basilica School is one with the Catholics, especially Catholic schools in Orange County, in this religious Christian celebration.